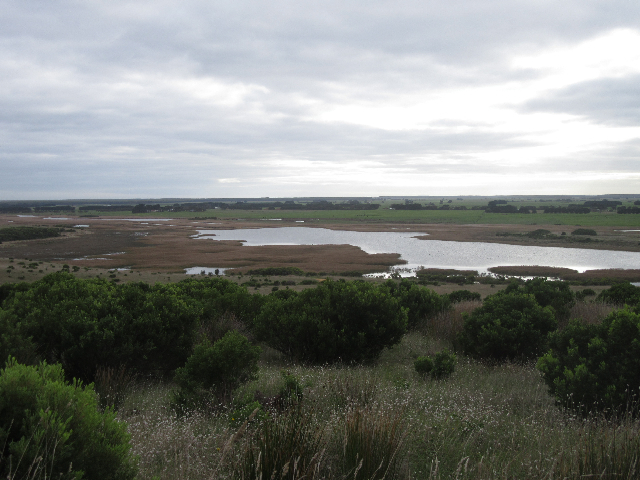 In mid-April 2017, 11 Orange-bellied Parrots were released in a restricted area near the Western Treatment Plant in Werribee. This first mainland release is part of a four-year trial Program which is seeking to release small flocks of OBPs into suitable habitat. All released birds have a radio transmitter attached to two tail feathers and are being tracked regularly. The released birds have now started to form small flocks of three to four birds and the first wild OBP, which arrived at the Western Treatment Plant on the 3rd of May, has started to interact with one of the newly formed flocks. If you are interested in finding out more about the 4-year trial Program or would like to get a regular update on the progress please contact Nicole. The first official Winter count weekend is over and so far, no Orange-bellied Parrots have been sighted in South-west Victoria. However, large flocks of Blue-winged Parrots (Neophema chrysostoma) were observed which indicates that suitable habitat is available and gives us hope of spotting an OBP later this year. We will continue to survey potential habitat along the beautiful coast of the South West during winter. If you are interested in joining us, contact Nicole by emailing  or calling 0414 778 309.

Finally, you would like to boost your confidence first or are simply interested in hearing about the current recovery progress, register for the OBP Workshop in Koroit on the 1st of July. We would love to hear from you.