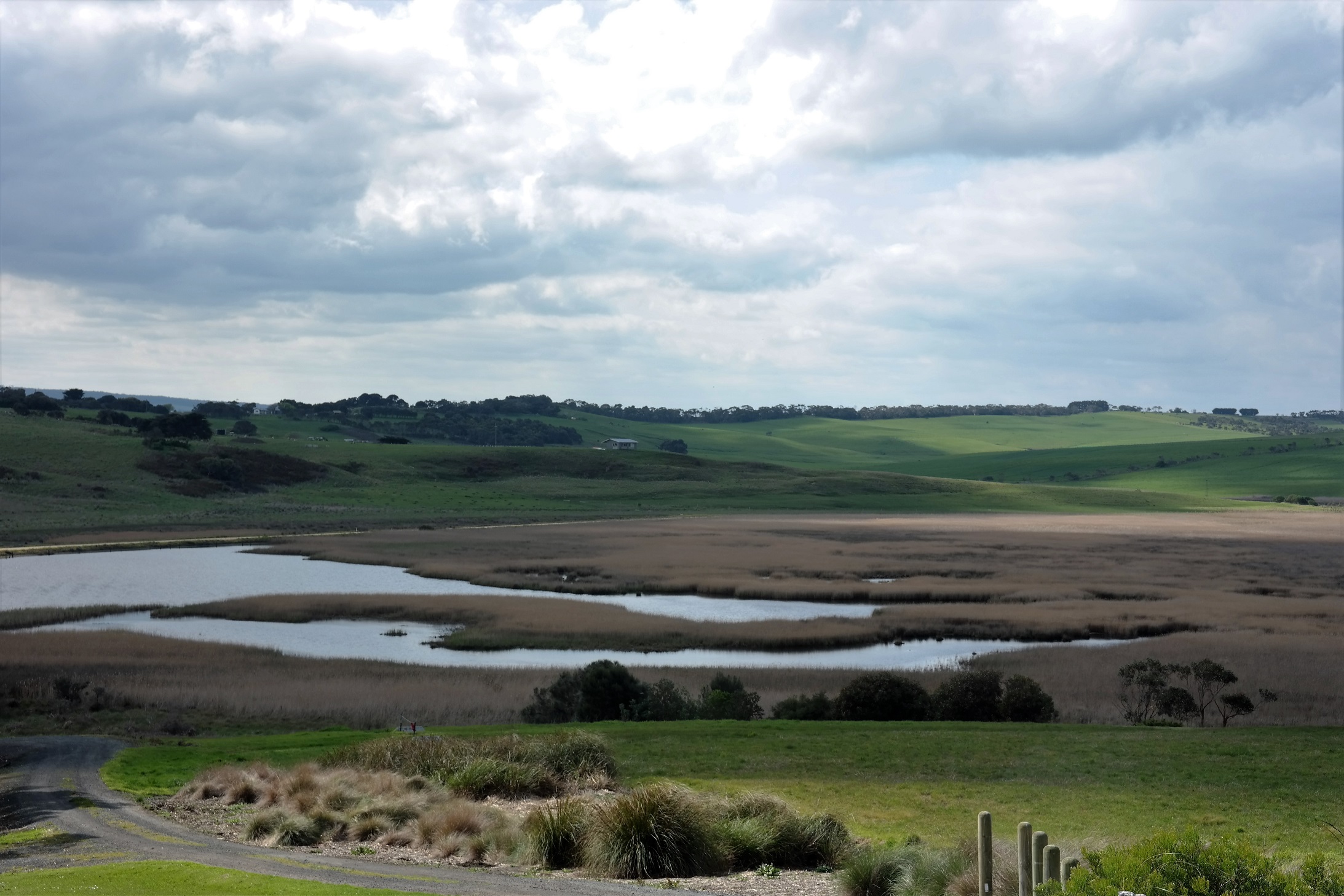 Earlier this month I travelled east to visit some coastal landscapes along the Shipwreck Coast. I was fortunate to meet with the Princetown Landcare Group, and scope some potential habitat areas of the estuary of the Gellibrand River. The Princetown Landcare Group are involved in an impressive array of environmental projects and monitoring programs, and are keen to undertake some searches to locate important habitat types such as open saltmarsh in their local area. The estuarine wetland of the Gellibrand River, Princetown

I was also able to take the opportunity to meet Catherine Bell, who is currently undertaking a tender project with the Corangamite CMA to enhance coastal estuarine habitat at her property in Peterborough, including those favourable to the Orange-bellied Parrot.  Cath has recently undertaken activities such as fencing and revegetation. It is a magnificent spot, and encouraging to see Cath’s enthusiasm to undertake some meaningful restoration on her property that she hopes will be, in longevity, a valuable area for biodiversity as well as the local community. I thank the Princetown Landcare Group and Catherine very much for inviting me out on the day.

First OBPs arrive back to Melaleuca!

No Orange-bellied Parrots were observed in the far south-west Vic region over searches in September. Updates from coordinators in the Bellarine Peninsula and Port Phillip regions noted a seeming disappearance in late August of the OBP individuals closely monitored earlier in the wintering season, with one of the groups of three birds reappearing for a short stint before again disappearing days later. The collective feeling from the recovery team was that OBPs were preparing to start their long journey across Bass Strait. They were on the money with news coming in from Melaleuca on the morning of 20th September of the first OBP arrival, with several more individuals arriving later in the day.

Bellarine Coordinator Craig Morley shared in his September update an account of the life journey of one of the OBPs to return, the oldest bird in the wild population…

‘… he’s just completed his 18th trip across Bass Strait (between Melaleuca and the mainland) a staggering distance, over his lifetime, of more than 12,000 km (if my arithmetic is close to the mark)’ This really is something quite impressive to imagine for such a small parrot, and emphasises exactly how special it is to be able to locate individuals over their seasonal journeys and know that they now return to have the chance to contribute to another generation.

In closing this season’s search efforts I’d like to thank all those who have contributed to the volunteer effort and took the time to follow the journey of, and recovery efforts for the OBPs. I’d also like to thank DELWP and BirdLife Australia for partnering with NGT, enabling us to help with the delivery of volunteer coordination for this region.