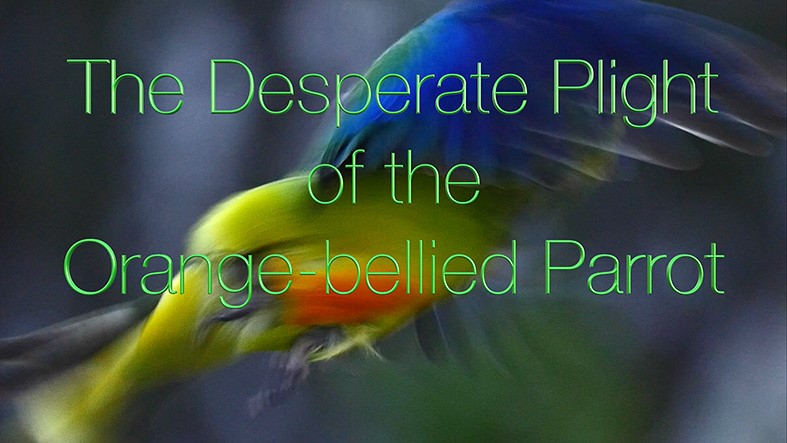 At the end of June, NGT helped organise a special OBP movie screening in Port Fairy. The Orange-bellied Parrot is one of the most endangered parrots in the world. They breed over the summer in South West Tasmania and then cross Bass Strait to spend the winter on the mainland coast of Victoria and South Australia. A documentary The Desperate Plight of the Orange-bellied Parrot by filmmaker David Neilson tells their story and the efforts by scientists to save this species from extinction.

David Neilson spent the past three years volunteering regularly for the OBP recovery program at Melaleuca in South West Tasmania. He was instantly fascinated by the birds and started filming them in 2015. He then decided to make a film to show how beautiful these birds are, and to tell their story. The Desperate Plight of the Orange-bellied Parrot is a powerful reminder of the plight of all our endangered fauna and flora. Filmmaker Neilson and his partner Karen Alexander are calling for a substantial increase in federal government funding for threatened species conservation. The movie was a beautiful and artistic way of telling the OBP’s story and we’ve received great feedback from our local volunteers. For some of the long-term volunteers who have never seen an OBP in the wild this was an excellent opportunity to improve their ID skills with the many fascinating close up shots and slow motion footage.

NGT was hoping that the screening would help to increase and encourage the local community engagement in the Winter count survey weekends in the South-west of Victoria. As it was held just two days before our annual OBP ID workshop it certainly increased the number of participants and interest in the workshop. Twenty-one people attended the workshop in Koroit and we are hoping that we will get a few new volunteers helping us out over the September count weekend. Great turn out for the OBP Workshop in Koroit.

We would like to take the opportunity to thank all the volunteers who have contributed to this year’s survey effort so far and are looking forward to another busy and fun survey weekend.

The OBP winter monitoring program in south west Victoria is undertaken by Nature Glenelg Trust in close partnership with BirdLife Australia and the Department of Environment, Land, Water and Planning. The program is funded by the Victorian Government Biodiversity On-ground Actions program.